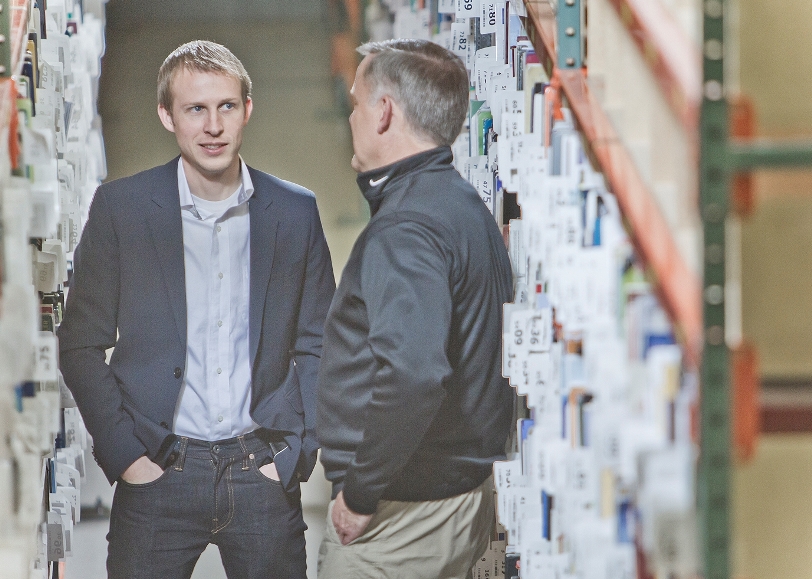 A Business Born of a Great Idea.

A student stands at a kiosk and places an order for a textbook rental.  This causes two things: 1) the bookstore staff grabs the book and has it ready for the student to pick up at the counter.  2) A fellow named Alan Martin technically buys the book from the bookstore.  This is set in motion as part of the ordering process at the kiosk, which Martin has provided the bookstore.

The student gets use of a textbook for a short use of time at a price less than that for an outright purchase.  The bookstore gets the price of the rental, many times over for the same book.  Martin gets a commission, and his business is very successful.

Another iteration of his model is taking in orders online, having amazon ship the book to the customer, including a hot-pink return envelope in which he gets the return.

It’s a simple idea, one that Martin got in 2007 while working on a degree at Webster University in Utah.  He got together with a buddy—write this next part down—and applied for many, many credit cards instead of applying for a bank loan.  He maxed out enough cards to get a $250,000 line of credit and started buying and distributing knowledge.

Sidewalk hit a snag early on when Amazon decided it wasn’t going to ship these books out for Martin, cutting off the supply.  That caused many hungry young learners to miss out on their merchandise, which caused Martin to have to mail out 40% off coupons.  However, rather than just licking his wounds, he actually set up some contracts with Amazon so everyone was clear and things were above-board.  They also went the way of the kiosks and other ways of diversifying to not risk too much in a toe-to-toe battle with Amazon.

Martin is interested in forging meaningful partnerships with independent bookstores that want to tap into the potential of doing business locally.  That is what is to be connoted by the name Sidewalk.  The company has grown a bit, now employing a staff of 110.

Martin’s success shows a tremendous amount of out-of-the box thinking, using means of distribution, and, in general, business models that many others might dismiss as impossible.  He dealt with small problems as he needed to and made the business work—and flourish.

Are you wanting to learn all that you can about how to make your presence known on the internet? Looking for ways to get in front of your target … END_OF_DOCUMENT_TOKEN_TO_BE_REPLACED

Pharmacies must find a way to compete with other businesses in their industry. More comprehensive assessments of the business and how it operates … END_OF_DOCUMENT_TOKEN_TO_BE_REPLACED

Gaming is a hobby that so many of us enjoy, but depending on the style of game we play, and how seriously we take our hobby, it can get a little … END_OF_DOCUMENT_TOKEN_TO_BE_REPLACED