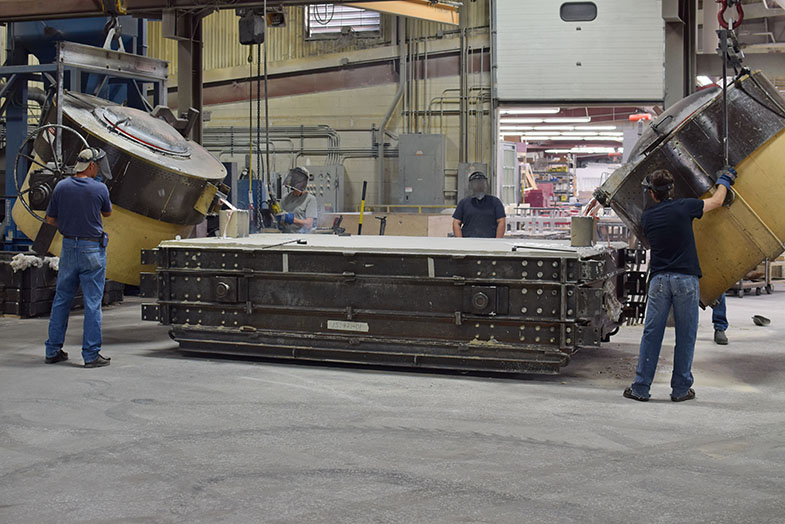 Industrial plants called foundries evolved over the decades as new technology and information became available. A foundry is basically an industrial setting where different metals are melted and cast or poured into special molds in required shapes. Around 90% of manufactured goods depend on metal castings of one sort or another for component parts. Aluminum, iron, and steel are the most common metals or alloys cast in foundries. The foundry process has been used for centuries.

Foundries have existed for centuries and the cast metal objects were used for weaponry, religious worship, and tools. Archeologists have found many objects from the Copper, Bronze and Iron Ages. In addition, a copper axe was found with a mummy from 3300 BC. Foundries in ancient Mesopotamia, Iraq, and Syria are some of the earliest. They used clay castings in hot fire pits to shape gold, silver, and copper. When tin was discovered, it could be added to copper to form bronze, the original alloy.

The first Aluminum Foundry was established in the mid-eighteen hundreds, but its history goes back much farther. At one point, aluminum was considered rarer than silver and gold and held more value. In early history, aluminum oxide clay was used for fabric dyeing, tanning hides, first aid, and fireproofing.

The problem was extracting the pure form of aluminum for further uses. The big break came in 1886 when two different inventors separately discovered and developed affordable electrolysis processes that could be used to separate aluminum from aluminum oxide. This process was limited by the large amount of electricity required. Charles Hall got a U.S. patent for the process in 1889.

In 1887, the Australian Karl Bayer, an engineer, discovered a chemical process to extract alumina from the commonly occurring aluminum ore bauxite. Both processes are still used today to produce the world’s aluminum. These advances in aluminum production and usability fueled many advances in manufacturing and the foundry process.

The first aluminum smelter was located in Rouen and opened in 1856. The foundry moved several times in the next few years and was sold in 1860 to Henry Merle with the aluminum company Compagnie d’Alais et de la Camargue, which dominated the new aluminum market for decades.

In the late 1800s, many people were making advances in the processing and use of aluminum. It is hard to pinpoint who invented what process for the casting of aluminum but a man with the last name of Sturges got a patent in 1849 for a machine to die-cast aluminum printing type. The mid-1800s is also when the process of die casting by pressure injection came into use. In 1876, Colonel William Frishmuth produced the first authenticated aluminum castings in his foundry in Philadelphia for an engineer’s transit.

In the early 1900s, the casting of other shapes besides printer type and cash registers became more common. Industrialists soon started using aluminum for power transmission lines, engines, aluminum foil, aircraft engines and frames, and countless other products. In 1935 the first meeting of the Aluminum Association took place in New York City.

Aluminum was one of several metals cast in foundries in the early 20th century until it became a common metal used in manufacturing. Aluminum helped the United States’ war efforts in both the 1st and 2nd World Wars. Germany even replaced many of its silver coins with aluminum coins during the wars. In the 1930s, aluminum freight cars appeared, and aluminum was also a building component. Aluminum was heavily used in aircraft production because of its lighter weight.

By the 1950s, aluminum was a common manufacturing material. In 1954, aluminum production reached 2,810,000 metric tons. In 1956, the first aluminum beverage can was produced, and by the 1970s, they were in common use., By 1956 there were six major aluminum companies, including Alcoa, Reynolds, Alcon, Kaiser, Alusuisse, and Pechiney.

Aluminum is one of the earliest metals to be commonly recycled starting during the world war efforts and increasing in the 1970s. This recycling was an effort to avoid more government restrictions. Recycling aluminum cans and other end-use products increased as technology was developed to make the recycled product near the quality of primary aluminum.

Aluminum Production and Foundary Services in the 2000s

With the world COVID crisis affecting overseas manufacturing and delivery of parts, it is especially advantageous to use an American-based aluminum foundry with casting and machining capabilities. Manufacturers needing product development assistance can get that help from their United States foundry and its highly qualified experts. When everything is manufactured in America, there are fewer shipping uncertainties and more manufacturing control.

The technological advances in aluminum casting and machining keep improving the product and what it can be used for. Two main casting methods are green sand and air-set casting. These processes offer many options for shape, detail, size, and coring. Foundries use cutting edge equipment like robotic pouring, automated molding, and in-house heat treating. They also use CAD software to assist in product design and engineering.

Aluminum and aluminum alloys are used to produce a wide range of products and parts to keep America and the world moving and operating. Aluminum is found in the automobile industry, the space industry, railroad cars, beverage and food containers, computers, foils to wrap food, kitchen pans and utensils, window and door frames, beer kegs, appliances, televisions, and satellite dishes.

Aluminum is also used in power lines, highrise buildings, ships, consumer electronics, and many more things we use every day. Every home and commercial building has aluminum products.