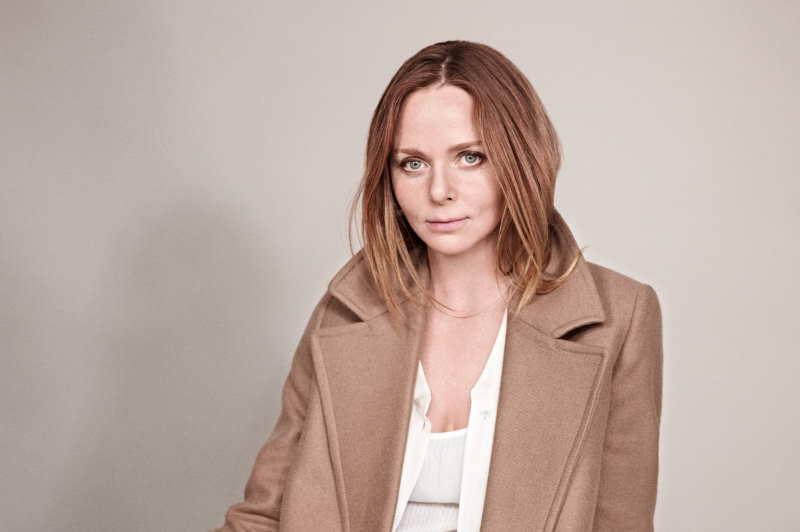 Stella McCartney is rightly considered to be a discoverer of the eco-fashion movement in luxury fashion, because she has been following ethical principles – not to use leather and natural fur, constantly increasing the presence of organic cotton, forever giving up the strong dyes – since the brand was founded in 2001. With her social responsibility, McCartney, who doesn’t eat meat and who initiated the Meat Free Monday programme with her father Paul, went so far as to answer the question of what to do if you got a fur vest from your grandmother: “Keep it at home and don’t show it to anyone – otherwise you’re sort of advertising the fur! To be fair, the leather substitute Stella uses is as good as the natural material. Amazing properties fake, which, incidentally, costs the company 70 percent more expensive than the original, Stella creates from a combination of elastic label flora (material from acrylic and polymeric fibers), a strong vegetan (a mixture of polyurethane and cotton) and recyclable plastic.

Even the Gucci Group, which owns the brand, has planted the eco-problem: from now the company’s offices work on wind energy.

Unlike most eco-brands, People Tree, which emerged in 2001, quickly gained popularity – in no small part due to the personality of its creator, Safia Minnie, who is commonly considered the founder of Fair Trade movement. (Fair Trade). People Tree does not tolerate artificial colours and synthetics, preferring recycled materials. The brand’s products are manufactured exclusively in Southeast Asian countries. And if until recently People Tree has only been distinguished for its ethics, the cooperation with Thakoon, Topshop and actress Emma Watson, which Safia herself sent to Bangladesh, seems to correct the situation with the actual product. Only one question remains: how can a tunic in the style of a 100% wool made by hand in Nepal with full compliance with the laws of fair trade cost 70 pounds?

Not everyone can compete with Patagonia in terms of technology: the number of patents attributable to a company producing sports and leisure wear is measured in two figures. And most patents are green! Having abandoned the use of conventional cotton in 1996, Patagonia began developing new high-tech fabrics, mainly based on polyester from recycled plastic bottles and obsolete items. Another innovation of the company is the special water-repellent Deluge technology, which is used to process outerwear, thus extending its life by at least twice.

Ciel attracted attention even before Sarah Ratti, known for her work with the Victoria and Albert Museum’s acclaimed Conscious Earthwear brand, won the Ethical Fashion Awards in 2007. Even then, Sienna Miller, Eva Herzigova and Cate Blanchett could be recorded as fans of the brand, while jackets, dresses and feminine, almost airy knitwear with French sputtering (ciel in French means “sky”) appeared on the pages of Italian and British Vogue. Over the past three years, Ciel has developed a line of organic cosmetics and lingerie. In order not to waste precious eco fabrics in vain, Sarah Ratti has established a waste-free production (involving total upcycling of knitwear remnants), not only from organic cotton, but also from alpaca, silk and linen wool.

Hollywood just couldn’t stay away from the eco-trend, and this was well felt by Deborah Lindquist, a graduate of Parsons School of Design. From the East Coast, where she managed to get a clientele like Sarah Jessica Parker and Gwen Stephanie, the girl moved to Los Angeles. In her own studio, she creates environmentally friendly clothes for Hollywood stars and their dogs. Working on Deborah Lindquist Eco Fashion Brand, Deborah is trying to marry eco-friend couture, and judging by the fact that she recently launched a collection of “green” wedding dresses, she succeeds.

Any company worth its letterhead goes to great lengths to find and hire the right staff. This goes to show how important it is to create a team that … END_OF_DOCUMENT_TOKEN_TO_BE_REPLACED

Mastering compliance can reap many benefits for your business. Compliance with laws and regulations will create a positive working environment for … END_OF_DOCUMENT_TOKEN_TO_BE_REPLACED

We talk a lot about the ways that entrepreneurs can keep their start up’s burn rate as low as possible, including ways to get an office on the cheap … END_OF_DOCUMENT_TOKEN_TO_BE_REPLACED