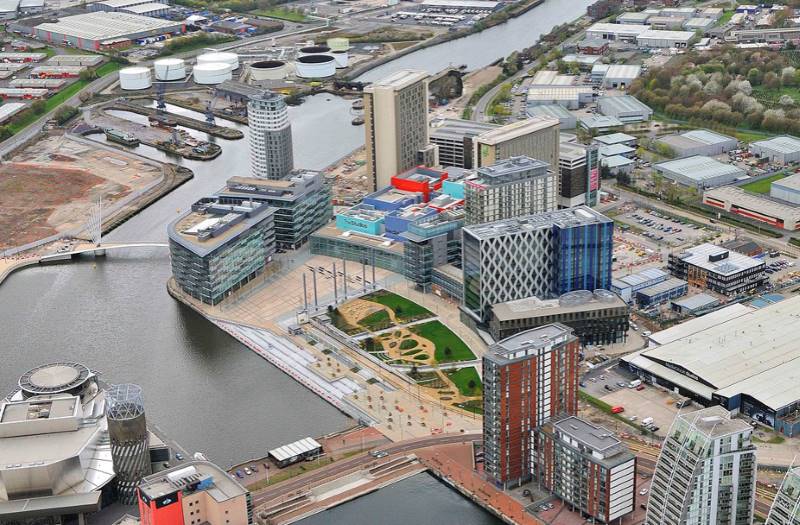 Doubling in size and doubling in ambition, Manchester’s MediaCity has been given the green light for Phase 2 of its extensive vision to revitalise the region.

Grand plans have been designed to extend the region on the banks of the Manchester ship canal into a new development plot holding great promise for the future of property in Manchester.

Set for completion by 2026, MediaCityUK is a world-renowned established visitor destination already embracing its positive reputation amongst top broadcasters and industry professionals.

By doubling in size, an extra 7.7 hectares of land will regenerate the region and propel it into the spotlight for property investment by providing first class opportunities through regeneration.

Valued at approximately £1 billon of investment, companies such as Santander have provided £10 million of the funding to redesign Manchester’s existing MediaCityUK.
Aiming to deliver the ambitious plans are Peel Holdings, who are working seamlessly alongside a plethora of architects, developers and landscape designers to deliver Manchester’s population with a unique space for working and living.

The total magnitude of the site will welcome ten contemporary designed buildings, nearly 55,000 extra square metres of high-quality office space, distinctive retail and leisure facilities, plus a sequence of new public spaces incorporated within an innovative public realm. But what impacts will this activity have for investment in and around MediaCityUK?

Commercial property as well as residential property will attract investors from all around the globe. By introducing commercial businesses, hundreds of jobs will be created in order to meet the soaring demands inflicted from the flourishing community.

A multitude of jobs will be created, ranging from working around the clock in professional newsrooms of large broadcasting giants, to serving cocktails in the many of the up-market bars and restaurants plotted alongside the canal.

Dominating much of the area, the BBC alone employ around 2,700 staff, with 5,000 produced in total after the successful launch of Phase 1 in 2007, these figures hold enormous hope for the future and are set to increase as business surges in line with the devised development scheme.

With this being said, residential growth will not be limited to MediaCityUK alone, Manchester will expect to see rapid growth across new builds in surrounding areas to take advantage of the increased demands derived from the sudden pour of local businesses.

The job market across MediaCityUK is set to experience a major boost, acting as a magnet for attracting people into the city who require state of the art accommodation. Potential tenants can conveniently commute from Manchester city centre in less than 10 minutes by train, suggesting the development’s impact on residential property is seeping vastly throughout multiple pockets of Manchester, not just staying concentrated to Media City’s core.

RW Invest, specialise in buy to let investments, summarising MediaCityUK as ‘a landmark for investment properties’. These Liverpool based property specialists offer an array of properties in the heart of MediaCityUK as well as closely neighbouring towns.

Besides from residential properties, student property proves to be a goldmine of an opportunity for investors due to the University of Salford’s thriving Media City’s campus. Staggering student numbers will be drawn to the cutting-edge facilities which will drive the appeal and demand for purpose-built student accommodation.

Experiencing a period of renaissance, the evolving district of Manchester is transforming from a formerly tired waterside plot of land into diverse hotbed for investment.

By boasting excellent rental yields and masses of opportunity for capital appreciation, MediaCityUK has secured its unmistakable reputation as the number one area for property investment, whilst embarking on the UKs most determined redevelopment projects ever recorded.