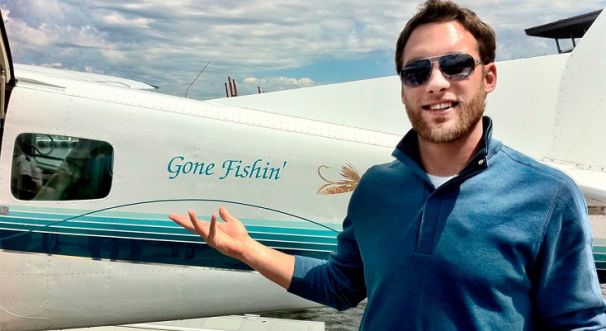 You always hear people saying “there’s an app for that.”  Before long, they might start saying Chad Mureta built an app for that.  His first was Fingerprint Security-Pro, but he’s developed just about 50 of them, netting almost 40 million downloads.

But Mureta’s story isn’t just one of a successful IT person who knows how to create and to sell.  It goes way beyond that.  His story began in a hospital.

Or perhaps it began on a road near Charlotte, NC.  Mureta was driving home from a basketball game when he hit a deer, causing his car to flip four times.

One of Mureta’s arms was severely injured and he spent several lonely, long weeks in the hospital, the bills and debt piling up.  He was bored and depressed, but he found a way to turn this state into something positive, still having some reserves of intellectual curiosity and drive.

The iPhone 3G he’d purchased before the accident and an article on app millionaires inspired him.  In his hospital bed, the incipient entrepreneur designed his first app, Fingerprint Security-Pro.

After his release from hospital, Mureta took out a loan for $1,800 to get his sketches and designs to a reality and to start the company.  What’s interesting is that not only had Mureta just learned about apps and how to build them, but he didn’t consider himself to be a techie anyway.

The fact that Mureta was a hybrid, someone who had ideas but wasn’t a coder, was to play a pretty big role in the rest of his life and career.  But before we get there, we should say that he did extensive market research, and as he developed his various apps, he also started several app companies.

The first step for Mureta was downloading apps.  He was a novice.  He didn’t have a degree in IT, didn’t work for an app development company, didn’t have connections or a background in using or developing apps.  It would be a bit like wanting to be a chef and not knowing how to cook.  After studying the market, he began hiring coders, and away he went in building an app empire.

And the empire concept is the most important thing in Mureta’s career.  In 2012, he decided to take a step that many entrepreneurs do: share with others.  A big step for many people who have found a unique—or at least effective—way of making a bundle is amping things up into the guru phase: put out some web sites, a set of DVD’s, a book, something that teaches others how to do what you’ve done.

Now, as you know from reading this blog, once an entrepreneur writes a successful guide for others, he or she is on that higher plane, a respected expert who can be on easy street (even more than before) due to the passive income from this new brand.

For Murela, it was the book App Empire: Make Money, Have a Life, and Let Technology Work for You.  Published in 2012, the book intends to (and has been successful) serve as a step-by-step manual for would-be developers.  It talks people through, not just how to cobble together an app, but how to bring it to market and be successful with it.

The book really knocked Murela into web superstardom.  To be fair, though, by all accounts, he seemed to have been living a Tim Ferriss-like four-hour workweek already, due to the downloads of his apps.  In any case, it’s refreshing and nice to hear about such a guru who just did not know about the product he was developing before he started.  There’s hope for the rest of us!