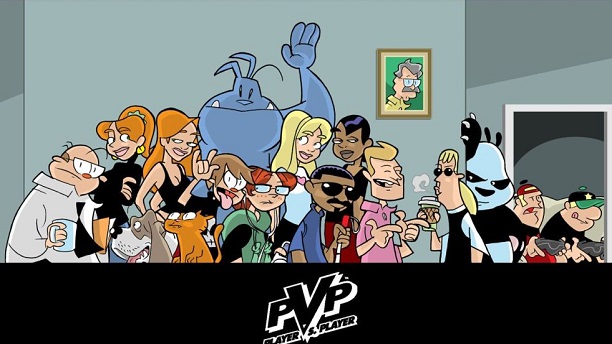 Scott Kurtz is a hero and an icon among comic book artists.  There’s a good reason for that. Rather than grinding out as many comics as he could around his hard-scrabble 9 to 5-er, Kurtz has set up a full-time gig for himself and his associates, a whole franchise: PVP.

PVP is a sort of comic universe, a website that publishes several lines of comics authored chiefly by Kurtz, every single day.  It has been in existence since 1998 and is a franchise unto itself.  Readership numbers have been reported as high as 150,000.

Kurtz’s PVP comics cohere around the hub of a fictional video game company, often covering their personal lives.  One of the main protagonists is Brent Sienna, along with a giant blue troll named Skull.  Other characters are Jade, Brent’s wife and foil, and Max Powers, the arch enemy.

Kurtz did his college thing at the University of North Texas where he kept up a comic strip in the student paper for several semesters.  Not long after he began some of the work that would turn into PVP (Player vs. Player).

Like a lot of people who have a pretty strong online presence and a following, Kurtz developed a reputation for sharing his opinions in a fairly blunt style.  In 2002-04, he became notorious for his rants on various gaming and comic-related issues, and developed strong rivalries with others in the field.

It’s an element of web culture: while angering people and even picking fights might turn a few people off, it seems to serve as a strong glue for those who support the pot-stirrer in question.  It has gotten to the point that many people believe it’s necessary to trade in controversial opinions to be an “influencer” or to maintain a large web following.

We think it may be the comics themselves that have been Kurtz ticket.  We do know that over the course of his long-term success, Kurtz has been able to do something that only a handful of webpreneurs have: open up a line of merchandise.  Yes, a line with as many variations and characters as PVP does have its merch line to match.  Indeed PVP’s store has an impressive array of t-shirts relating to many of the elements of their brand.

What Kurtz embodies more than anything is consistency.  His longevity with his brand is nothing short of stunning, and it is in turn that very longevity that has helped build the brand.  Not only does being around for a long time give one the chance to accrue great word of mouth, but people are impressed by longevity.  Also, long-time fans are going to be most likely to purchase any spinoff products or merchandise.

There are many entrepreneurs who are restless.  Many very wealthy and successful ones use capital from one venture to quickly dart into another one.  Nothing wrong with that.  But it’s kind of refreshing to see someone stick with one brand for so long.  If it ain’t broke, don’t fix it, right?