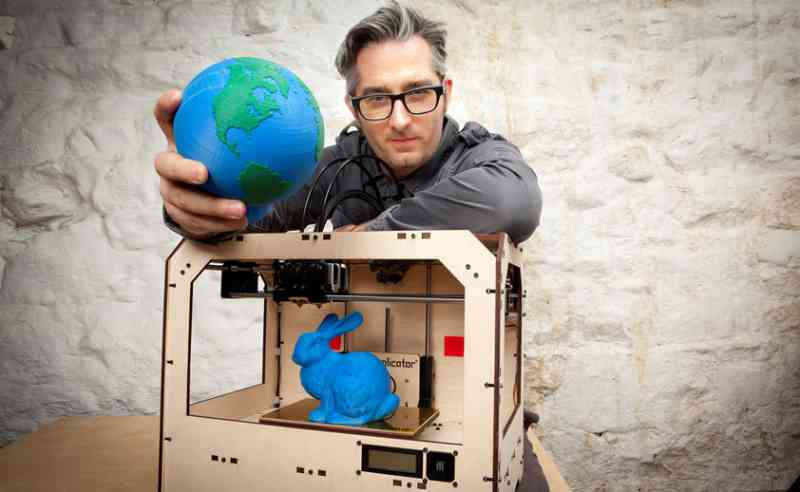 “One my psychoses is that I feel like I can do anything,” Bre Pettis told Inc.com.

He continued, “I believe anybody can do anything, even thing that don’t exist.”  What doesn’t exist was, for years, the mainstay of the life of Bre Pettis co-founder and CEO of MakerBot, a manufacturer and seller of 3-D Printers.  And now his vision not only exists, but thrives.

A decade ago, it was all South Park quotes and the latest news on Christina Aguilera’s tour for Pettis, a middle school teacher.  The bespectacled Pettis moved to NYC in 2007 and started winging the Frisbee around with techsters, having begun contributing videos to Make magazine.  From there, it was tinkering around, bringing a few little things to life.  “The Holy Grail of a tinkerer is to make something that makes something,” he observes.

For him, this meant a 3-D printer, something he’d heard of but had never actually seen. Pettis told lifehacker.com that he’s long been in practice of writing down “the ideas (he has) in broad terms” and work each day to bring them to life.  That was a lot of days when it came to getting a MakerBot prototype made—it was two years.  Finally, the crew knuckled under and got one going.

Those wishing to think and act like Pettis should take heed of what happened next.  To start building a buzz, Pettis didn’t take a few photos of the prototype and put them on facebook.  He didn’t set up a booth at the local county fair.  No, he went to the music, culture, and tech festival in Austin, South By Southwest.  He set up a prototype at a bar and started popping out shot glasses.  Without going into a long narrative of MakerBot, the rest is history, the company growing and growing until they finally sold it to Sratasys for $403 million dollars.

If ever there was a story of a company that put concept first and business details later, it was MakerBot.  There are many philosophies on how much planning and research should go into a startup, but MakerBot succeeded with a bit of a seat of its pants approach.

Everything was ad hoc: the company had to buy motors to make the machines, and literally didn’t know where to do so.  They didn’t have money.  They invented their processes as they went, figuring out what they had to do as they needed to.  It was their passion that gave them the intestinal fortitude to keep moving forward.  Some companies make a lot of decisions and do the right thing but don’t really produce anything special at the end of it.

If you have a high tolerance for risk and a lot of patience, you can learn a lot from Bre Pettis and his drive.  He essentially put his outcome first and didn’t ask any other questions–what he was ultimately going fro drove him, answering any questions that could possibly arise–it was always onward.

The outspread of Covid-19 has proven problematic for businesses worldwide. Many had to shut down operations because of prevailing losses, while others … END_OF_DOCUMENT_TOKEN_TO_BE_REPLACED

Getting a promotion or gaining extra qualifications should increase your earning power, so why does your budget seem to take a hit every time you take … END_OF_DOCUMENT_TOKEN_TO_BE_REPLACED

Access to capital is a big problem that entrepreneurs face when starting their business. Although there are other issues involved when launching a … END_OF_DOCUMENT_TOKEN_TO_BE_REPLACED