Home / Blog / Is a Co-working Space Right for Your Startup? 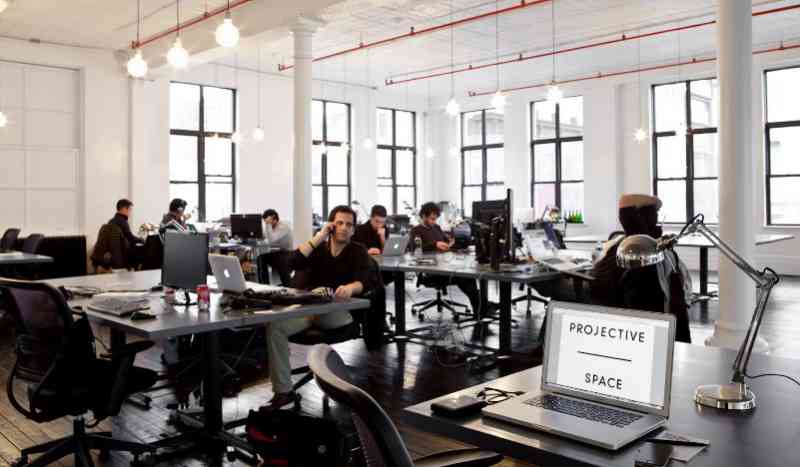 People share houses and apartments to split the cost of cable and utilities.  This also means lower rent in most cases.  Co-working, a business practice that has been increasingly prevalent over the last twenty-five years, works on the same principle.  Let’s look at whether or not your business might be able to use a roommate—or four or five.

Various definitions of co-working thrive, ranging from co-operative exchanges of services and working toward common ends to just sharing spaces  This last definition will be the one we’ll be working with here.

Co-working involves a large workspace owned by a realtor or perhaps a non-profit.  Some are run as co-ops, and they require dues that are much lower than rent would normally be in a commercial space.  The spaces are populated by small businesses, two-person partnerships, freelancers, etc.  The people can be of any field, related or otherwise.

In addition to getting a nice discount on rent, the participants share the internet and wi-fi infrastructure, shared conference rooms, and shared printing and fax technology.

One might not be completely enthused about having accounts down the way and the heating and cooling folks over in the corner, potential odd bedfellows.  We all want a place of our own, right?  Naturally, working in this manner is a form of bootstrapping, cutting back just a little to save some startup funds.

But it’s beneficial to engage in some networking as well.  Lawton Ursrey, writing for Forbes, says, “The first time I stepped into a coworking space I realized I was not alone.  I met people that were just as passionate and driven as I was about their business goals—and many were facing the same challenges.  In just a short amount of time, you have a network of people that you can ask advice from—on anything.”

This may be a bigger deal than it sounds, more than just cosmetic or vaguely psychological.  If you multiply the benefits by all the members of your team and you’ll find a lot of benefits in the little tips they’ll pick up, the savings and saved time from combining tasks, trading work, etc.

If there’s something about this that sounds a bit thin, a concept that isn’t all the way there, consider the case of WeWork.  It’s a New York-based startup that rents out shared spaces for small businesses and entrepreneurs.  The company just snagged $355 million in investments and is valued at $5B.

Not only does WeWork now have a presence in 8 cities, but it has developed WeWork Commons, a networking website similar to LinkedIn.  Co-working is a living, breathing entity, gaining more and more attention.  It is, you’ve probably gathered, part of the Sharing Economy.  This includes renting cars, companies sharing delivery services, and ride-sharing services like Uber.

On the one hand, we are growing more and more fragmented, with a third of everyone working a s a freelancer.  And that doesn’t count people starting their own businesses.  The traditional workplace has expelled thousands of folks, who are now going back into a formal space of some kind.  Co-working is at least worth looking into.

Your business means a lot to you.You started it.  You may have even conceived of the entire concept. It may be, in many ways, original to you.  One … END_OF_DOCUMENT_TOKEN_TO_BE_REPLACED

SEO and social networking best practices to increase your traffic. Building and developing your blog or website (click here to see how this works … END_OF_DOCUMENT_TOKEN_TO_BE_REPLACED

In this day and age, cyberattacks are a real threat. Businesses, both big and small, are vulnerable to malicious activities, yet only the wealthiest … END_OF_DOCUMENT_TOKEN_TO_BE_REPLACED