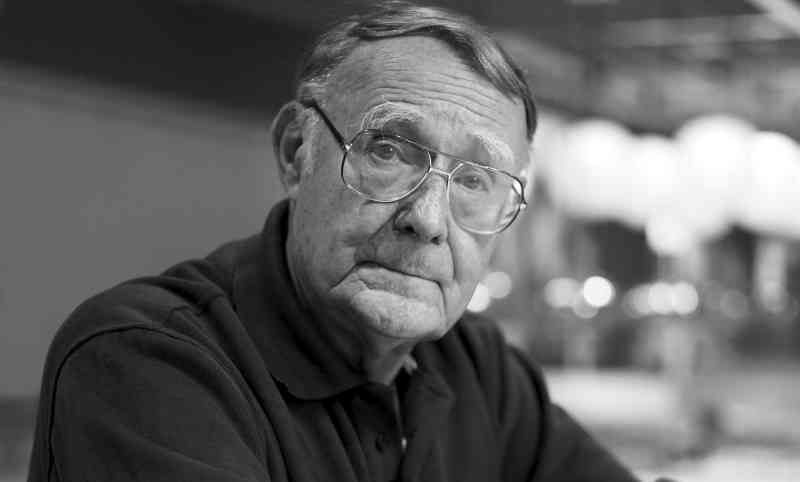 Here’s the third installment of our Historical Entrepreneur series, in which we look a bit beyond the Kalanicks and Spiegels and to the lives of entrepreneurs whose careers have unfolded (mostly) in their entirety.  These not be folks who were there to witness the horrors of the Civil War or the rolling out of the Model T, but people who may have done business in a world slightly different from ours.  Their lessons are valuable.

Ingvar Kamprad’s name may be hard for you to place.  But you know his business, IKEA, the iconic Swedish purveyor of furniture and meatballs.  Here’s a look at how he’s carried himself as an entrepreneur.  It’s a story of leadership, generosity, and integrity.

Consider the story of how he raised funds for IKEA.  Through getting good grades in school.  His father gave him a cash reward for good scholarship.  He said, “I think I’ll start a furniture company,” and IKEA was born.

Using trees hewn from nearby forests, Kamprad began manufacturing furniture, publishing his first catalog in 1951 and his first showroom in 1953.  In the 1970’s, the company opened its first restaurant and its largest store, in Stockholm; additionally, it introduced its signature products, such as the klippan sofa, the quirky, rounded SKOPA chair, and the POANG chair.  The IKEA style became iconic, its sales flourished, and it branched out internationally, reaching the U.S. (Philadelphia) in 1985.

The company now has 287 stores, and Kamprad is one wealthy Swede.

He’s not an American rock-star entrepreneur and he doesn’t act like one.  Rather than private jets or limos, Kamprad rides public transportation, and the car he owns is a 13-year-old Volvo.  He says, “how the hell can I ask the people who work for me to travel cheaply if I am traveling in luxury.  It’s a question of good leadership.”  He’s frugal in all his purchases, asking himself if IKEA customers would be able to afford a particular goodie he’s considering for himself. His leadership style is all about example.

And it’s also about having a social conscience.  Kamprad was rocked by a 1995 scandal involving a Pakistani boy sold into labor and made to work harsh fourteen-hour-days tied to a loom—the company ultimately reaping the fruits of this boy’s labor sold carpets to IKEA.  Not only did IKEA break ties with this company, but Kamprad went important steps further, partnering with UNICEF to prevent child labor.  The program isn’t there to make little cosmetic changes but to thoroughly address the poverty that underlies child labor.  The Kamprad-UNICEF program services hundreds of businesses in India in an area known as the Carpet Belt.

Another component of his leadership style is being savvy about who he picks to lead under him.  A few years ago he was shopping with his wife in the U.S. He felt that a lot of the store’s items were copied from IKEA.  While he was saying as much, a store employee approached him, speaking in Danish.  She was Pernille Speirs Lopez, who Kamprad hired, and who eventually became the president of the company.  Kamprad says he has an excellent feel who will fit into the IKEA family.

Without question, Kamprad’s style is generous, humane, and filled with humility.

The outspread of Covid-19 has proven problematic for businesses worldwide. Many had to shut down operations because of prevailing losses, while others … END_OF_DOCUMENT_TOKEN_TO_BE_REPLACED

Getting a promotion or gaining extra qualifications should increase your earning power, so why does your budget seem to take a hit every time you take … END_OF_DOCUMENT_TOKEN_TO_BE_REPLACED

Access to capital is a big problem that entrepreneurs face when starting their business. Although there are other issues involved when launching a … END_OF_DOCUMENT_TOKEN_TO_BE_REPLACED