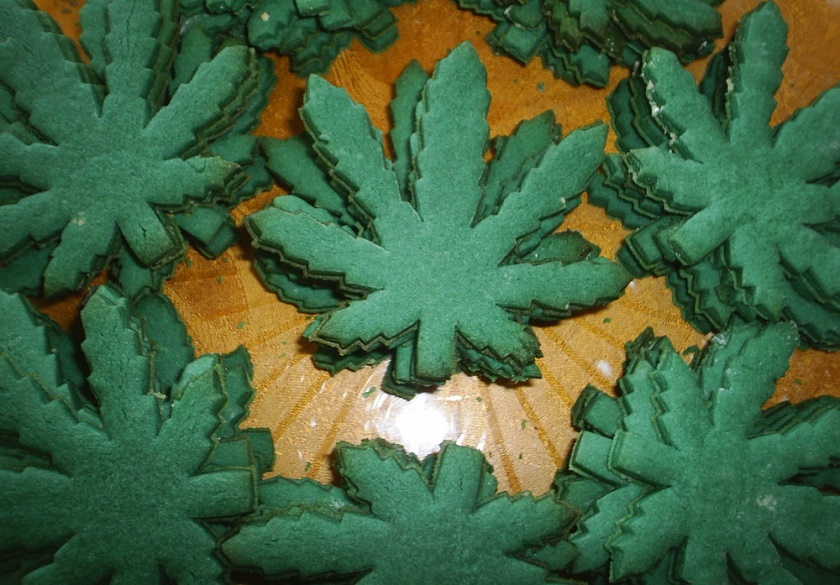 Whenever we heard arguments for legalizing pot during the 80’s, 90’s and aught-zeroes, they always included the economic benefits.  The money would always roll in with legalized green.  Colorado and Washington have now legalized marijuana, and indeed “potrepreneurs” have taken advantage.

Cheeba Chews are marijuana-infused taffy snacks developed by Colorado’s James Howler.  After the legalization, investors are beating down Howler’s door.

Then there’s the Rookie Cookie, baked up by ganjapreneurs Growing Kitchen, headed up by Holden Sproul.  This is a cookie that delivers the green in low doses, speaking to the concern that eating marijuana-inclusive foods sometimes leads to intense stomach upset.  One retailer who sells the Rookie, Tim Cullen, says, “no one buys a handle of Jim Beam and thinks they should drink all of that in one sitting.  But people do want to eat an entire cookie.”  The Rookie is dosed low enough to allow you to do that.

Dixie One watermelon cream soda delivers half of a serving size—5 milligrams of THC—with some demand for milder stuff.

No one is suggesting that pot food is the only available or desirable market.  In addition to various ways of selling cannabis itself, entrepreneurs have found ways of exploiting many aspects of the lifestyle, including lucrative websites reviewing varieties of the plant.

Other opportunities include creating concentrates like dabs and hash oils, which are particularly popular among medical users; creating and marketing new and better bongs and pipes; and opening up marijuana bars and related shops.

This emerging industry is fascinating, giving students of business and economic trends a great opportunity to see things unfolding.  The USA Today reported that Brown-Forman, which produces Jack Daniels whiskey, named the legalization of marijuana as a threat to its market in its 2014 annual report.

Those wishing to get into the market need to keep a keen eye on which states do or do not pass legalization laws.  As they do, one has to be sure to understand the parameters.  For example, Colorado requires investors to have lived in the state for two years, cutting down on a carpet-bagging phenomenon of people flooding the state just to exploit the pot market.  There’s the specter of federal law as well, and that substantially muddies the waters too.

The marijuana industry has many built-in and obvious markets, with pot soda being one that’s a little less obvious, showing the possibilities for diversification.  But it’s clear that it’s largely untapped, with so many possibilities for expansion in terms of products, delivery and distribution, accessories, on and on.  Increased state legalization will snowball these opportunities.  It’s not too soon to begin looking, not just for ways to join the basic infrastructure of legalized pot, but to look for creative and clever ways of cashing in.

Are you wanting to learn all that you can about how to make your presence known on the internet? Looking for ways to get in front of your target … END_OF_DOCUMENT_TOKEN_TO_BE_REPLACED

Pharmacies must find a way to compete with other businesses in their industry. More comprehensive assessments of the business and how it operates … END_OF_DOCUMENT_TOKEN_TO_BE_REPLACED

Gaming is a hobby that so many of us enjoy, but depending on the style of game we play, and how seriously we take our hobby, it can get a little … END_OF_DOCUMENT_TOKEN_TO_BE_REPLACED