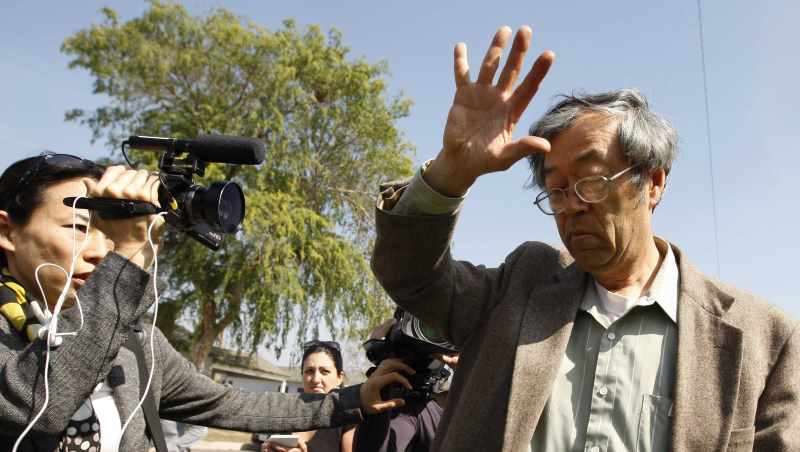 While he seems to have been outed, Dorian Nakamoto denies being Satoshi Nakamoto.

In March, Newsweek put a mask on its cover, meant to represent Dorian Satoshi Nakamoto. The headline was “Bitcoin’s Face.” The article was penned by Leah McGrath Goodman, and begins like those occasional articles from the 80’s in which journalists schlepped to New Hampshire looking for J.D. Salinger. Goodman found Nakamoto’s alleged address in L.A., knocked on the door, and had the police called on her. When the cops came, the reporter proceeded to use the occasion to ask the recluse whether or not he was the founder of Bitcoin, an entity who had until that time been anonymous.

Goodman says that Nakamoto “tacitly” acknowledged his role in Bitcoin, wanting the takeaway to be that he’s “no longer involved in that” and he doesn’t want to talk about it anymore.

Not long before this driveway moment, it had become commonly believed that the founder of Bitcoin was someone named Satoshi Nakamoto. Dorian Satoshi Nakomoto sounds an awful lot like that. There are many Satoshi Nakamotos in the world, and Goodman checked into each of them before deciding that Dorian was indeed her man.

Bitcoin employs someone with the title “chief scientist.” Without question, his name is Gavin Andresen. A few years ago, Andresen was hired to write code for Bitcoin. He says, “back then, it was not clear that creating Bitcoin might be a legal thing to do,” adding that Nakamoto “went through great lengths to protect his anonymity.” Andresen wasn’t able to talk to his boss on the phone, and not even through personal e-mail addresses, but via a Bitcoin forum.

Once Andresen’s—and other coders’—work was done, the initial announcement of Bitcoin hit the Internet (this was 2008), and it came with the name Satoshi Nakamoto.

After the Newsweek piece hit, whatever he’d told the journalist in his driveway, Dorian Nakamoto began to vehemently deny that he was the Bitcoin man. His story was that he was one person and Satoshi was another.

Why, then, did Dorian take to YouTube and to Reddit to thank the Bitcoin community for $20,000 raised in a fundraising campaign begun by Andreas M. Antonopoulos of the community? This user’s stated purpose for the campaign was to help soften the blow he felt Nakamoto had suffered by having the harsh glare of the spotlight shone on him; and to help with legal bills and with medical bills Nakamoto’s family had apparently incurred.

The question at the inception of the campaign was whether or not Nakamoto would turn away the funds. He has not.

Whoever founded Bitcoin, the cryptocurrency continues to thrive. Bitcoin ATMs are now operating in a handful of North American cities, and two lucky college football teams will square off in the Bitcoin Bowl this December 26th. Someone averse to publicity is going to want to hide, under a pseudonym or otherwise. Therefore Nakamoto’s thanks did come with another denial of being the founder. He says he’s just an enthusiast.

The exterior of your home plays an essential role in making either a good or bad impression. For instant curb appeal to buyers and visitors, you need … END_OF_DOCUMENT_TOKEN_TO_BE_REPLACED

For any business that has already invested in a blogger outreach campaign, were you able to reach your goals this year? How confident are you that … END_OF_DOCUMENT_TOKEN_TO_BE_REPLACED

It has been proven with time that we are what we eat, read, think, and how we spend most of our time. With time, we have witnessed the famous … END_OF_DOCUMENT_TOKEN_TO_BE_REPLACED