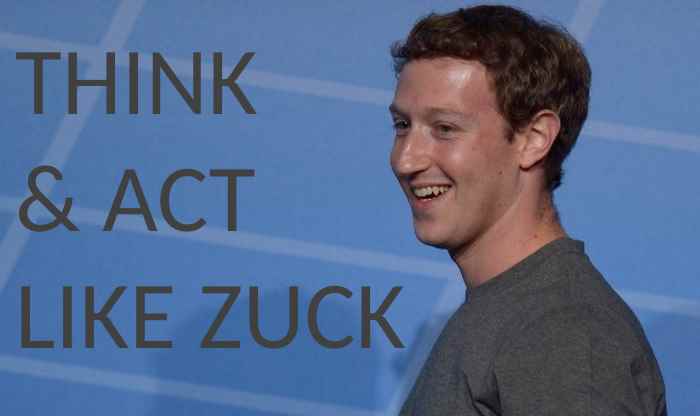 Don’t let the casual air fool you: for Zuckerberg, it’s all about intensity.

The hoodie, the jeans, the mild mannerisms: Mark Zuckerberg appears perpetually to have just woken from a nap or on his way to a video game session. Nothing in the young legendary entrepreneur looks urgent.

But, if it’s not clear from his catch phrase “move fast and break things,” Zuckerberg’s philosophy centers around urgency.

When someone sees an old Facebook post, she might not comment on it, finding it played out. There’s a short expiration date on everything posted on Facebook—the whole enterprise works on the principle of “now, now, now.”

Zuckerberg believes that if people don’t feel the need to act on something soon, they won’t act at all.

It’s a philosophy he applies to his employees, setting short deadlines, keeping everyone urgent and on their toes.

It’s hard to remember back to the early days of Facebook, when it was just about poking and throwing sheep at people and friending. Zuckerberg didn’t want Facebook to be just one Internet destination, but a hub where people would watch videos, play games, and read articles. It’s a different way of conceiving of information, and it busted the status quo wide open. Zuckerberg feels that if it doesn’t represent a break in the way things are presently done, it’s not worth doing.

We all know that Facebook’s controversial way of profiting from its users’ personal information. It’s another way of breaking status quo, and not in a way that’s entirely valiant or easy to appreciate. In this case, what gets broken can be the trust between Zuckerberg and the people who use his site.

Why, then, are Facebook and Zuckerberg so successful? The answer is in connectedness, the principle in which Zuckerberg believes the most. What ultimately drives his success is a passion for his vision. He wanted to give people platforms for sharing and connecting and re-connecting and for voicing their opinions. It’s a grand idea, one into which most of us have bought, and it causes the vast majority of people to tolerate the exploitation of their information.

Zuckerberg’s vision involves enough idealism for him to have built an empire out of it.

More than speed or disruption, it’s something simple, connecting people that has made Zuckerberg successful. He was able to tap into something people wanted, something large and overarching. He followed his vision with dogged determination, and that is probably the biggest lesson an entrepreneur.

There are far too many examples to ignore—the entrepreneurs who really take the world by storm are up to something other than the pursuit of riches. They always have a vision and a set of goals about which they are fiercely passionate. Zuckerberg is no exception—don’t let his “what, me worry?” smirk fool you.

Technology has changed the way businesses operate and the increasing use of data is yet another way in which tech is revolutionising industries. Now … END_OF_DOCUMENT_TOKEN_TO_BE_REPLACED

In the growing internet of things, security is becoming a much more serious concern for businesses. Nowadays it feels like everything is connected to … END_OF_DOCUMENT_TOKEN_TO_BE_REPLACED

If you are an international student studying abroad, it can often be a rough experience. You are in an unfamiliar setting and are away from your … END_OF_DOCUMENT_TOKEN_TO_BE_REPLACED