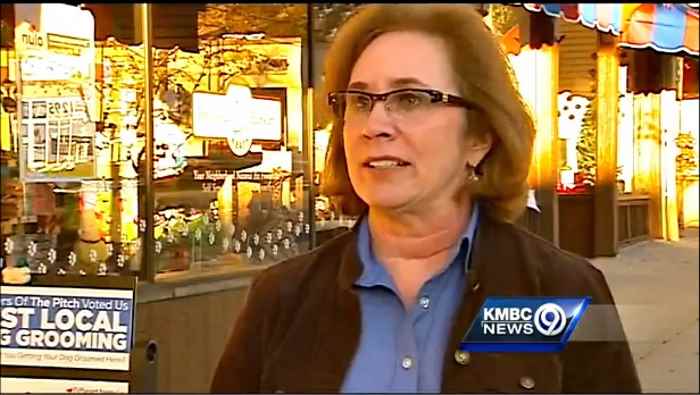 Every couple of weeks, we profile an over-50 entrepreneur, and today’s is Delena Stout, founder and CEO of Brookside Barkery & Bath, a Kansas City dog grooming center and pet supply store.

Like many over-50 entrepreneurs, Stout had a standard career before finding herself unexpectedly displaced. After losing her job in 2002, Stout went through a new venture program and wrote a business plan.

Inspired by her own pets, she designed Brookside Barkery and Bath, a natural-grooming service using only washers with no chemicals. Brookside also sells all-natural pet food. In this they are pioneers, providing holistic health to their clients’ pets.

Not long after its 2003 opening, the business started to rack up awards; in 2011, Stout was featured in the Kansas City Business Journal’s Women Who Mean Business series; in 2013, U.S. News & World Report highlighted her in its feature on Baby Boomer entrepreneurs.

Stout told bizjournals.com that she gets her chief satisfaction from seeing the animals come back healthier and happier.

Clearly, Stout’s business is rooted in idealism, namely her very legitimate concern for the animals. This, combined with her commitment to the holistic health ideals she holds dear, makes her business a draw. She classically found a need and filled it.

Like Starbucks’ Howard Schultz and Mary Kay Cosmetics’ Mary Kay Ash, Stout places great importance on the quality of her staff. She says that she was hesitant to hire someone who wasn’t very knowledgeable about animals and their health needs, but that she did invest heavily in their education. It brings the group close together. Assistant manager Angela Bridges told Bizjournals the crew is like a family.

It’s a growing family, too. As is the case with many successful businesses, the first flush of success begets expansion. Stout added a second Barkery and then a third. Four years after the opening of the first store, the business had topped the $1 million in revenue mark. The expansion, from store one to store two, wasn’t easy. In need of capital, she took on a neighbor, who had a thriving dog-training business, a partner.

Stout’s story illustrates how successful one can be doing what one loves—at any age.

Her experience with her own dog led the way to her chemical-free and holistic ideology. Some of the business principles she’d learned as a new business developer for her previous employer provided her with skills to run things right. These are the hallmarks of an older entrepreneur, wise, shaped by experience, patient enough to adhere to principles.

Technology has changed the way businesses operate and the increasing use of data is yet another way in which tech is revolutionising industries. Now … END_OF_DOCUMENT_TOKEN_TO_BE_REPLACED

In the growing internet of things, security is becoming a much more serious concern for businesses. Nowadays it feels like everything is connected to … END_OF_DOCUMENT_TOKEN_TO_BE_REPLACED

If you are an international student studying abroad, it can often be a rough experience. You are in an unfamiliar setting and are away from your … END_OF_DOCUMENT_TOKEN_TO_BE_REPLACED