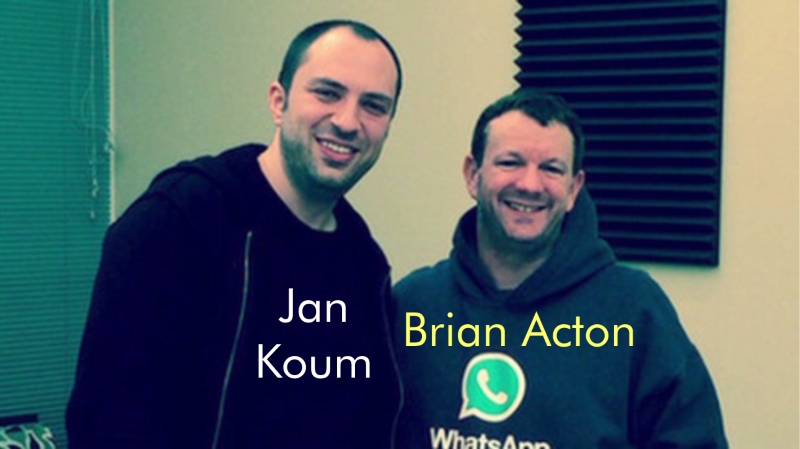 Thanks to their messaging service Whatsapp having been bought by Facebook, Jan Koum and Brian Acton are billionaires. But they’re not interested in private jets, parties, or hype. They don’t aim to be celebrities or public dot com stars.

Jan Koum tweeted not so long ago that the next person to call him an entrepreneur would get punched in the face by his bodyguard, while a few years ago, his first tweet quoted the novel and movie Fight Club: “Advertising has us chasing cars and clothes, working jobs we hate so we can buy shit we don’t need.”

The company that earned Koum and Acton the giant piles of money they don’t want to spend is WhatsApp, which they founded in Mountain View, CA in 2009. WhatsApp is a cross-platform messaging system for mobile phones. Its niche is that it identifies users by a phone number, meaning that it doesn’t collect personal information. It also cuts out the annoying ads.

It now has 450 million users, and was recently snapped up by Facebook’s Mark Zuckerberg for the sum of $4 billion in cash, $12 billion in restricted stock, and $1 billion in stock. So how did they get here?

A Long Road To Silicon Valley

Koum grew up in a small village outside Kiev, poor and lacking indoor plumbing. He quips, “I didn’t have a computer until I was nineteen—but I did have an abacus.” He left—he’d probably say “escaped”—at sixteen. Eventually, he ended up at Yahoo! Here’s where his story intersects with that of Acton, a computer scientist from Michigan who also worked for Yahoo! The two were dissatisfied with the way their famous employer integrated ads into its services, and aimed for something different.

The Ukrainian émigré and the Michigander teamed up to create a mobile messaging service aimed to be free of all the problems they had with what had come before. They made firm commitments specifically to not store user information, to not include ads, and to give a stable and frictionless experience to the user.

Wired-UK reports that WhatsApp, by Feb. of this year, was up to 450 million active users, with 18 billion messages zooming through the network on an average day.

For Koum and Acton, the mission takes precedence over the numbers, the money, the spoils of success.

Koum told Wired that he and his partner “focused on business sustainability and revenue rather than getting big fast,” adding, “we’ve been incognito almost all the time.”

Incognito and focused. The two have a laser-like focus on messaging and messaging alone, keeping the app as simple as possible, avoiding what they call gimmicks. They’ve gone so far as to deny user requests for bells and whistles, with Acton declaring, “that stuff gets in the way.” 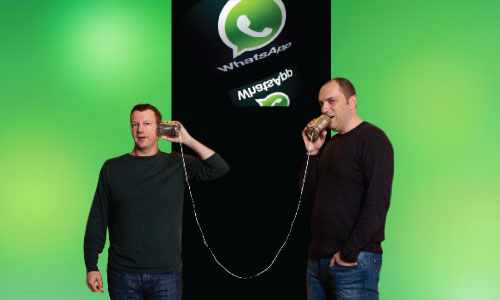 As Little About You As Possible

Not only did Koum grow up in abacus-level poverty, but he also grew up under the thumb of a repressive Soviet regime. He told Wired, “I grew up in a society where everything you did was eavesdropped on, recorded, snitched on.” One of his main reasons for coming to the U.S. was freedom of speech. So in today’s climate, with Verizon handing over information left and right to the NSA, WhatsApp feels extra need to stay as motivated as possible to not follow suit.

One way for them to avoid handing over information is to not have it in the first place. “We don’t know your name,” Koum says, “your gender…we’re not advertisement-driven so we don’t’ need personal databases.”

As Little About Us As Possible

Richard Branson and Mark Zuckerburg have given plenty of face time to the cameras over the years. But Koum and Acton don’t aspire to being public entrepreneurs, the sort who have opinions on everything and tweet fourteen times a day.

When a journalist from the English version of the news site elpais.com made it inside the HQ of WhatsApp, he was greeted with “you’re the first journalist to come in here.”

He then got a crash course in how hard it was to get the pair to pose for a photo—reportedly, they relented only when they found the pics for the elpais feature would be taken with a phone rather than a camera.

Clearly, for Koum and Acton, providing a service, even one that ends up pulling down an amazing windfall, is an end unto itself, not a catapult to notoriety or even the ability to buy a lot of fancy toys.

The outspread of Covid-19 has proven problematic for businesses worldwide. Many had to shut down operations because of prevailing losses, while others … END_OF_DOCUMENT_TOKEN_TO_BE_REPLACED

Getting a promotion or gaining extra qualifications should increase your earning power, so why does your budget seem to take a hit every time you take … END_OF_DOCUMENT_TOKEN_TO_BE_REPLACED

Access to capital is a big problem that entrepreneurs face when starting their business. Although there are other issues involved when launching a … END_OF_DOCUMENT_TOKEN_TO_BE_REPLACED