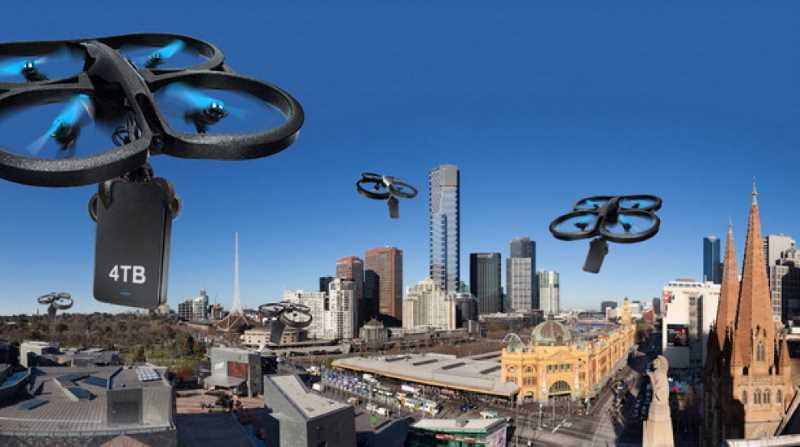 A sleek aircraft with a not-so-sleek name, drones are the future. Planes that fly themselves via software can be used in agriculture, delivery, data collection, and a number of fields that seems to be on the daily rise. Frugal Entrepreneur takes a look at 5 hot new drone startups making a difference and winging toward tomorrow.

1. Skyworks Aerial Systems – A Skyworks drone is made of four circular, black belts connected in rows of two, with a black antenna pointing up from the center. You guessed it: multi-rotor copters. The Las Vegas startup aims to give solutions to civil and business enterprises—indoor and outdoor needs.

The crafts are made from carbon composites, and are, if not compact, still as lithe in appearance as any drone out there. The student-launched company has won local and national awards, and had the foresight to develop machines with indoor applications, which means not having to wait for upcoming airspace clearance from the FAA.

2. DroneDeploy – This startup does not manufacture the drones themselves, trading, instead, in workflow software. One of the big issues with drones, in their infancy, is safety and logistical concerns. DroneDeploy helps the user control multiple crafts at once with a combination of cellular telemetry and web-based control software. This is aimed to increase the productivity of drones doing research in various capacity, as well as insuring safety.

3. 3D Robotics – Chris Anderson, former Wired editor, started this company around its stated principles of reliability, open-sourced, and innovative. It makes drones to be used for photography, construction, agriculture, and search and rescue. The company offers multicopters and planes, including the Y6 and X8 multicopters, as well as the Aero, which the company says is about endurance.

A University of Arkansas professor used a drone to make a huge discovery of a buried Puebloan community in New Mexico. The community’s homes had been buried by sandstone and were viewed by a drone flying overhead. Casana says he’s now interested in 3D’s Aero.

4. Skycatch – This San Fran company just celebrated its first birthday. The lightweight drones are run on software and contain an API that allows users to create custom apps for the behavior of their drone. Their website’s splash page is spectacular, but could make you sick to your stomach.

5. Pocket Drone – How do you not love a startup that successfully ran the Kickstarter gambit? Such was the case with the Pocket Drone, made by AirDroids, which started with the idea of making an iPhone fly. In any case, what the machine ends up doing is flying on autopilot, interacting with a phone’s GPS.

Some of the drone startups display stunning creativity and verve. There’s no doubt that the industry will be filled with controversy over the next several years. It will be one of the most-debated cultural phenomena, raising issues about privacy, safety, and technology’s reach.

The outspread of Covid-19 has proven problematic for businesses worldwide. Many had to shut down operations because of prevailing losses, while others … END_OF_DOCUMENT_TOKEN_TO_BE_REPLACED

Getting a promotion or gaining extra qualifications should increase your earning power, so why does your budget seem to take a hit every time you take … END_OF_DOCUMENT_TOKEN_TO_BE_REPLACED

Access to capital is a big problem that entrepreneurs face when starting their business. Although there are other issues involved when launching a … END_OF_DOCUMENT_TOKEN_TO_BE_REPLACED