Google Play Market is a very convenient tool for getting new useful apps for any Android phone user.

The selection on it is staggering, and with enough patience and luck you can find anything you want. Obviously, developers are trying to get the maximum exposure and profit for their apps using it, and for that one must score a high user rating, since it heavily influences how much your app is suggested to other people. Some do it by performing regular updates, listening to feedback and generally providing a useful product. Some choose various shortcuts that exist in the modern online world.

Fake reviews to boost app ratings have been a thing since this app libraries first emerged for the very first smart phones. While Google and Apple have been improving their selection methods and algorithms to weed this issue out, the spammers and bot users have also improved their methods to trick even the most scrutinous filters. Since it is almost impossible to approve all the user reviews by human operators, a lot of the fake ones slip through the cracks, and some shady developers use them to inflate the rating of their otherwise bad app. They purchase 5-star reviews for their own product, sometimes even going so far as to ordering 1- and 2-star reviews for their direct competition.

Let’s take a closer look to one of the top free dating apps on the Google Play Market right now – Hily. Going through the reviews done in February and March, one can tell that they are largely organically generated. A healthy mix of positive and negative reviews shows decent interest from the community, even though a lot of megative ones bring up serious issues of overcharge and the app not being actually free. What may seem suspicious is the way the negative reviews are suddenly outnumbered by the positive reviews in a very short time. Since there was no major update in that period of time, one might suggest that the influx of positive reviews was suddenly fabricated. 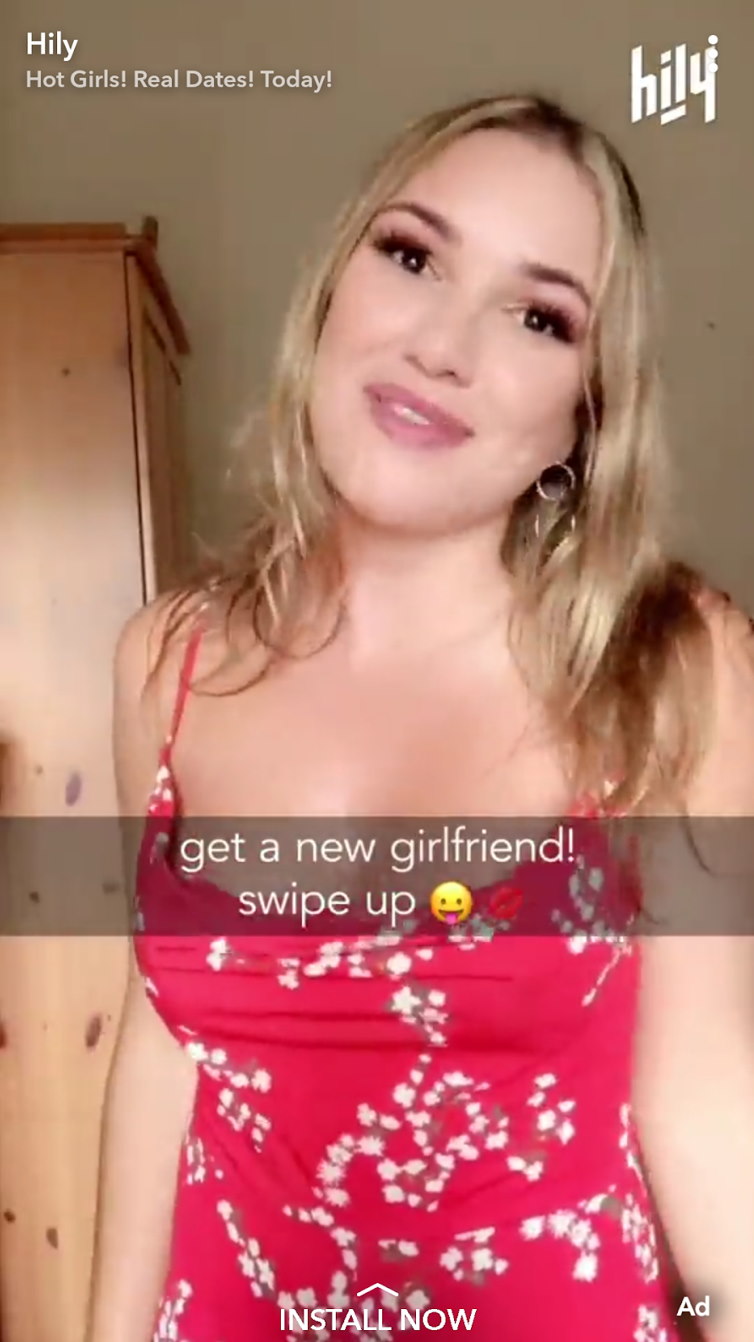 The reviewers say what is good and what needs to be improved but the biggest concern is heavy advertising with ads popping up every few minutes. Look at these 1-star ratings (translated from Portuguese); 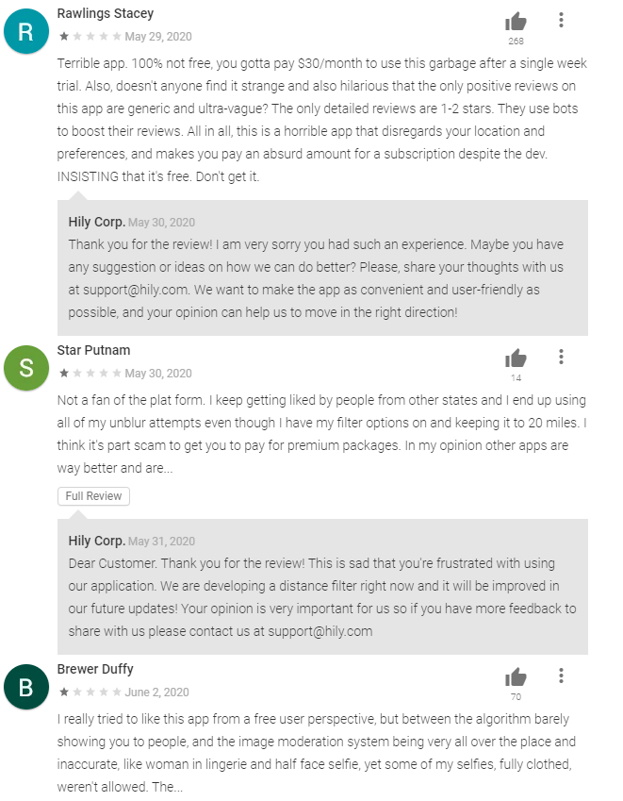 (Some real reviews for a change! 268 likes on a review from the 29th of may, that is how many good reviews Hily gets in 5 days! Obviously a lot more people agree with real input)

These mixed reviews about poor ad placement and paywalls continue until the week starting May 18th when there is a surge of positive reviews. A good number of them say that it is better than Tinder while others praise its ability to show quick matches. These one-liners are usually pointers to paid reviews. The surge on dates May 20-24 is another pointer. See some of them;

The stream of positive reviews is carefully controlled, and added to organic reviews in such a way that the overall rating stays where the developer wants it to be. But obvious mistakes happen, especially after rating drops. 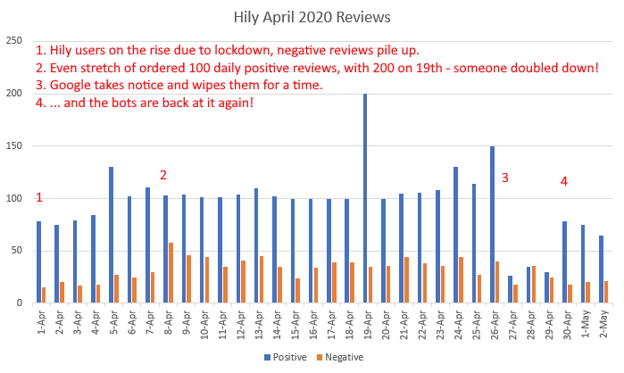 Hily was experiencing somewhat of a boom in mid-April, probably thanks to more people being interested in dating apps in general because of the pandemic. A lot of new users for a pretty terrible app means that a lot of organic 1- and 2-star reviews start piling up, and the overall rating of the application dropped. Developers can’t have that, because their placement and rank in the Dating App category is directly tied to that. At which point the fake review stream shows obvious signs of being artificial: for more than 10 days straight the amount of positive reviews in English was almost exactly 100, in Spanish – also exactly 100, and exactly 50 daily in French. After 10 days of this the application’s rating score was back where they wanted it, and the stream of positive reviews was somewhat quenched, with an average of anywhere from 20 to 70 daily positive reviews in English after that, most of them still looking suspicious.

A lot of other applications might be doing something very similar to alter their app rating. Not a lot of them do it so blatantly obvious that some simple data analysis can point it out, most of them mix and match and aim for a more organic looking pattern. Right now we can not say for sure when the next big update from Google will come to address this issue, so be careful which apps to trust before spending your money on them.

Read the reviews, judge for yourself and be skeptical of anything that obviously is very far from what the positive reviews say it is.

We also encourage users that have sunk in a few hours into the app to post reviews of their own, since the community ultimately should be the judge of which apps succeed and which fail.