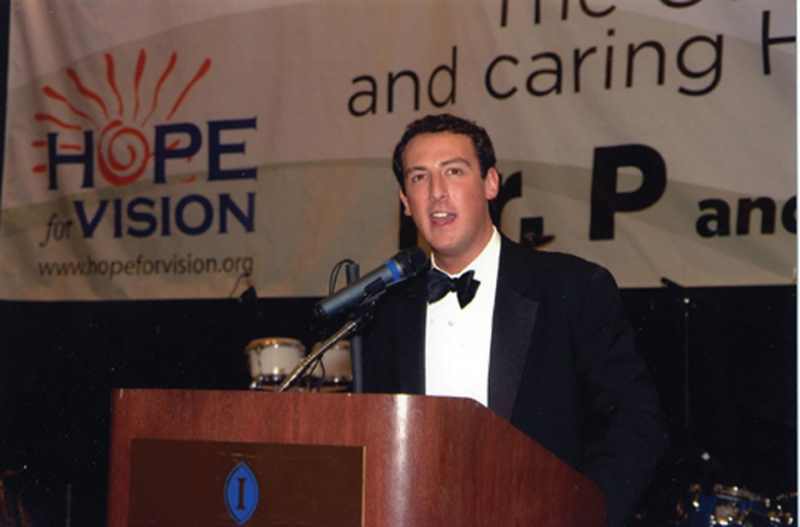 He’s been doing it his whole life.

Isaac Lidsky’s story is one of courage and incredible determination.  A disease called retinitis pigmentosa caused his sight to deteriorate from the time he was thirteen, leaving him blind by age twenty-five.  He now runs a construction company that generated $70 million in 2014.

Lidsky’s company is ODC Construction, named by Inc. one of the top job creators in the construction industry.  It employs 500 people and, according to Tampabay.com, was pace to start 3,000 homes in its native Florida in 2013.

Lidsky turned the business around after initial struggles.  In 2011, not long after he’d founded the company, he was near going broke.  The housing business, and the entire economy, were still shuddering through tough times.  Lidsky had invested everything in the business.  He and his wife had year-old triplets: the pressure was on.

He had come to a crossroads, having become an entrepreneur while working for the law firm Akin Gump Strauss Hauer & Feld LLP.  Before that, he’d been a law clerk in no less a prestigious venue than the Supreme Court, clerking both in the chamber of Ruth Bader Ginsburg and working on circuit court cases for Sandra Day O’Connor, who’d recently retired from the Supreme Court.  He was the first blind law clerk to work in the Supreme Court.

In other words, he’d gone from success to success…to feeling it was the construction business that might finally become his nemesis.
When things were looking grim, he was forced to take a considerable cash infusion from his mother—a large chunk of her life savings.  More pressure.

But this new energy took hold, leading to the rapid growth of ODC, which, under Lidksy’s leadership would become probably his greatest success.

If you’re wondering if Isaac Lidsky may possibly be the same Lidsky who starred alongside Dustin Diamond and Samantha Esteban in Saved By the Bell: The New Class, that’s an affirmative.  He got in on the series’ ground floor, playing Barton “Weasel” Wyzell.  At just thirteen, it looked as though the sky was perhaps not quite the limit for Isaac.

It was then that he began suffering from retinitis pigmentosa.  Before long it got so bad that he had to leave the show after its first season.  The question for any adolescent, beyond how to handle the shock and the worsening condition, would be how to move on.  He’d probably planned on an ongoing acting career, and now it was over.

Lidksy’s response was probably not what anyone expected.  While suffering a worsening condition, he rocketed through high school and enrolled in Harvard at the remarkable age of fifteen.

Due to his blindness, Lidksy has had to utilize various kinds of technology and has always overachieved in spite of his loss of sight.  He used that approach after buying ODC, looking at the kind of technology that was used there.  He felt that there wasn’t good software to dispatch work crews and equipment. His response?  To design his own proprietary software.

Did we mention he knew how to do that too?

Based in Orlando, the business then branched out to Tampa, which, as of 2014, brought in roughly 15% of the company’s business.  He’d originally bought the company—in 2010—when it was in rough shape and affordable.  In the upcoming years, he turned it into a juggernaut.

Ultimately, Lidksy has succeeded at everything he’s attempted, and he’s done it against the odds.  He’s worn an amazing array of hats—probably not his last.