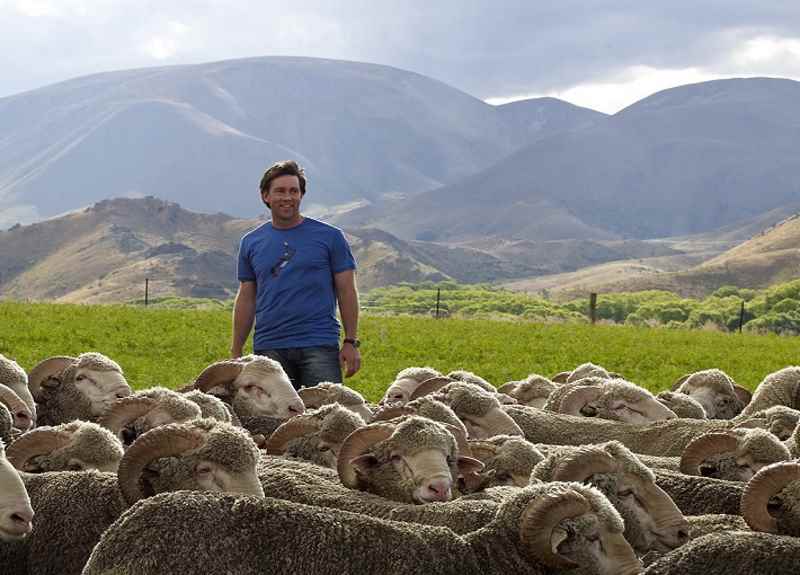 Moon is the founder of the outdoor clothing line Icebreaker, which makes its coats from wool.  Particularly Moon insists on merino wool, which refers to the type of sheep.  The first time Moon got a load of this kind of wool and the warmth and comfortability it provides, he was only 24.  He’d studies commerce and marketing at Otago University and saw (the New Zealand equivalent of) dollar signs in the wool.

He immersed himself in the life of a sheep rancher and re-mortgaged his house, apparently under the ruse that it was for a remodeled kitchen.  He slowly got things off the ground as a wholesaler, fighting a perception that wool wasn’t the way to go.  Moon told Intheblack.com, “It just seemed such a rich irony that the whole outdoor industry was about reconnecting people with nature, and then asking them to wrap themselves in plastic bags.”

But it didn’t take long for his natural approach to find its followers.  He branched out to Australia and then the Netherlands.  From there Icebreaker went from wholesaling to opening up retail outlets.  Now, Moon’s wool coats are found in 42 nations.  He’s opened up an office headquarters in the U.S.—Portland, to be exact.

And while I referred to coats above, Icebreaker sells a full complement of wools for your outdoor adventures.  If you can name a body part, Icebreaker has it literally covered.  And that includes mid layer garments and “first layers,” which go on top of “base layers.”

The Future is Wool

The company turned twenty at the beginning of 2015 and Moon is committed to constant improvement, always moving forward and doing an ever-better job.  He also remains committed to manufacturing just athletic gear, not getting into a broad range of clothing, since that would go against the company’s mission.

If ever was an entrepreneur who has a clear mission to which he’s faithfully committed, it’s Jeremy Moon.  His should be an inspirational story to all entrepreneurs because he built up an empire strictly out of things in which he strongly believed.  He has been uncompromising in his standards, and has a very clear philosophical backing for all he does.  The story of Moon and Icebreaker shows that sometimes insisting on doing things one’s own way, particularly if that way revolves around quality, really pays off.

Technology has changed the way businesses operate and the increasing use of data is yet another way in which tech is revolutionising industries. Now … END_OF_DOCUMENT_TOKEN_TO_BE_REPLACED

In the growing internet of things, security is becoming a much more serious concern for businesses. Nowadays it feels like everything is connected to … END_OF_DOCUMENT_TOKEN_TO_BE_REPLACED

If you are an international student studying abroad, it can often be a rough experience. You are in an unfamiliar setting and are away from your … END_OF_DOCUMENT_TOKEN_TO_BE_REPLACED