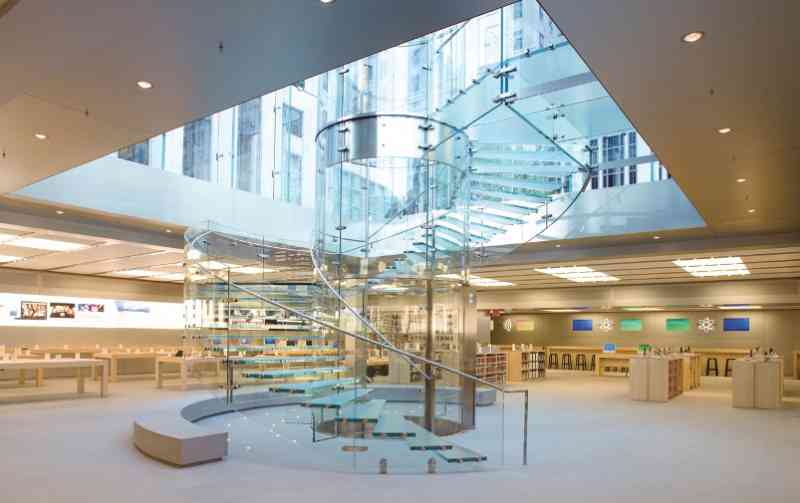 It’s not the staircase, I can tell you that.

Until about fifteen years ago, when one thought Apple, one thought hardware—Mac desktops and notebooks, and then the i-phone.  However, in the twenty-teens, the Apple empire has become famous and infamous for its retail stores.

Airy, buzzing with technology, Apple stores or eminently effective.  Here’s a look at how they’re artfully designed to get into the pockets of every customer who enters.

Apple has just under 500 stores worldwide, with 257 in the U.S.  They make more money per square foot than any other retail establishment.  hey seem to achieve this partly through a sort of feng shui, allowing air to travel straight through from front to back.  When you step through the gargantuan glass doors at are looking store’s front, you straight ahead at the genius bar, which we’ll discuss later.  Nearest you is an airy, uncluttered space with a few tables with laptops opened at a generous angle meant to provide a welcoming feel.  It’s not a cavernous home repairs big box store, but neither is it a cramped mall store with tables piled high with wares.  The stores, instead, make a person feel suitably at ease and free to think and decide on purchases.

Many retailers of computers and similar electronics offer you screens on their computers that ask for log-ins or that run some demo.  The Apple store, though, gives you machines that are up and running and connected to the internet.  That small trust they allow their customers makes an awful lot of difference.

I have a pseudo-intellectual bar set up in my apartment with cocktails and rye chips.  But the Apple store’s Genius Bar affords consultations and repairs.  It sits at the back of the store, just beyond the kids’ section, and was inspired by concierge desks and swanky hotels.

Whether or not numbers lie, a lot of people have believed the stats on sales coming from Apple stores—the design has brought a lot of imitators.  This was true so much that Apple sought to trademark its layout a few years ago—and was successful, at least in the European Union.

The renown of Apple stores has gone beyond the computer and electronics sector, and they are thought of as a model for retail design in general.  Often praised is their glorious lighting, fairy-tale staricases, and open layouts of multi-story locations.

Peter Bohlin is the architect of the first Apple stores.  Of his work, accomplished architect James Timberlake said, “no one in commercial architecture has ever channeled a product into architecture for a client the way Peter did for Apple.”

When the Fifth Avenue store opened in Manhattan in 2006, customers were in line for more than a day.

Jobs was very passionate about design, and met great success over his career by overseeing small details, and by including intricate details in whatever it is he designed.  This has become true of his retail stores, and not only do they show the pride Jobs took in his products, but they get bottom-line results as well.

Your business means a lot to you.You started it.  You may have even conceived of the entire concept. It may be, in many ways, original to you.  One … END_OF_DOCUMENT_TOKEN_TO_BE_REPLACED

SEO and social networking best practices to increase your traffic. Building and developing your blog or website (click here to see how this works … END_OF_DOCUMENT_TOKEN_TO_BE_REPLACED

In this day and age, cyberattacks are a real threat. Businesses, both big and small, are vulnerable to malicious activities, yet only the wealthiest … END_OF_DOCUMENT_TOKEN_TO_BE_REPLACED