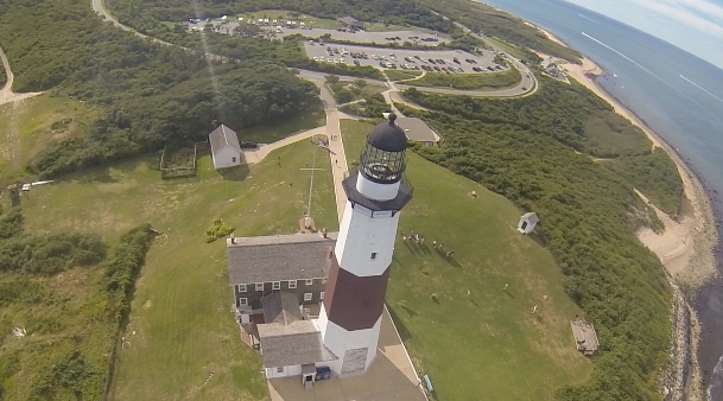 Spires launching into the sunny sky; slate gray rooftops shadowed in the late afternoon; black and white forms of people streaming up and down the driveway.  It’s a photograph you’d expect to see in TIME magazine and it was taken with a drone aircraft and re-published in a New York Times story on the burgeoning trend of drones photographing weddings.

The Cold Spring, NY wedding was that of Randy Florke and Sean Patrick Maloney, the latter a Democratic Representative.

Photography is one of the chief uses of drone aircraft in the industry’s infancy, outpacing delivery, an idea made famous by Amazon and Domino’s.

The photos of the NY wedding were taken by Parker Gyokeres of Propellerheads Aerial Photography, one of many startups getting into the wedding photography game using drones.

If you’re looking to be at the front of the curve in starting a drone-based photography business, here’s how.  The first thing you’ll need is the drone itself. There are, at present, dozens of companies cranking out hundreds of models of drones.  Some closely resemble airplanes, and some helicopters, while some are clusters of circular metal bands.
As one ready example, a company called Parrot manufactures a drone expressly for photography.  Other options include buying a drone without a camera and installing one.  You can use still photography, video, or both. There are already options under $300, while what are considered higher-end models run around $800.

You may need to buy a product called a gimbal to stabilize your camera and cut down on vibration, ensuring the highest quality. Whatever you choose to opt for, it’s a good idea to look for the best camera backpack that is sufficiently large enough to carry all of your equipment.

Once you’ve chosen your drone and the photography equipment, it’s time to practice.  Drones are flown in a way similar to model airplanes.  In some cases, it’s very hands-on, but in some cases, the drone follows a path directed by computer software.

As one would guess, the biggest safety issue is a crash.  You do need to avoid encounters with other aircraft by avoiding airports.  It’s probably not a bad idea to have, as much as possible, your client announce the presence of the drone before it becomes a scare.  At the congressman’s wedding, for instance, an aide of Hillary Clinton worried that someone would be killed.  It has often been the case that drone aircraft were mistaken for UFOs, terrorist tools, or something similarly fear-inspiring.  That will go away when the unmanned craft are better understood.

Another circumstance that will change will be the laws.  Presently, it is a bit unclear who can do what in terms of drones—where they can go, what they can do.  After his ritzy wedding at the big Episcopalian church, Congressman Maloney actually became the target of an investigation.  Regulation is being sorted out, and this occurrence will probably speed it up.  We’re still a bit ahead of the curve, so the laws on uses of drones will be better defined in the upcoming years.  Those who jump into the business may have a hand in determining laws, pleading their cases to lawmakers who need to be educated on the salient issues.

Aerial photography may never be as ubiquitously consumed as, say, coffee, but it is a developing field.  Beyond weddings, it can be used for agriculture and real estate, as well as for computer apps and similar IT uses.

If you’re a flight buff and interested in leaping into business with drones, aerial photography is one of the most likely scenarios right now.  There are plenty of other avenues, and creative ideas are often rewarded.  But one does need to find a sweet spot of being inventive but not way too far ahead of one’s time and of laws and the knowledge of the existence of one’s niche.